Thanks so much, everyone, for your wonderful comments on my last post! I was so disappointed in the quality of the photos when I was posting them, because they looked so good small on the phone display! Unfortunately, the next few posts will be the same; my sister was here for a while, so I did a couple of costume changes! Here is the next one (the quality in these is even worse; I had to lighten them up quite a bit so that the pleats would be visible):

It is made from a thick navy material that has a subtle herringbone pattern. It is actually a dark navy; hence the lightening-up. The shirt is a bright yellow pointelle shirt that I bought a long time ago; I love the scalloped collar and sleeves. Here is a shot of the side, and also of my awesome vintage navy oxfords! 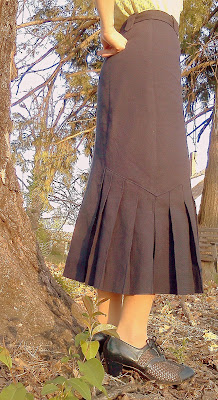 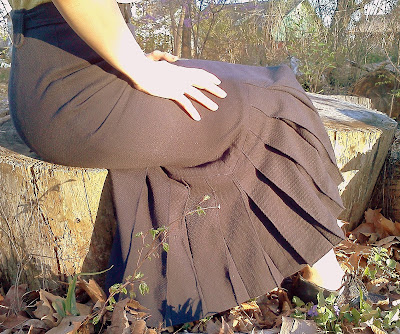 The material is so thick that I stitched the fronts and the backs of the pleats so that they would lie flat. It looked like a mermaid skirt for a while! I was inspired by this pattern, which broke my heart when it got away from me: 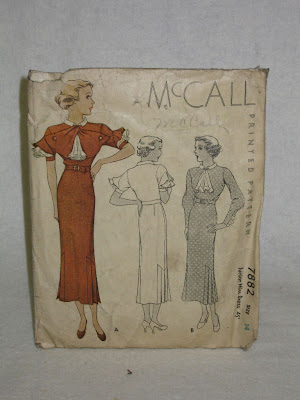 I made it by altering this '80s pattern (view B), in order to make the side-skirt come to a point instead of being strait across above the pleats: 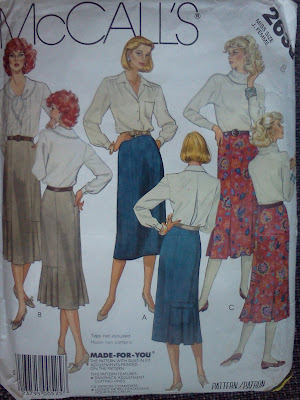 I made the hat using this pattern again. Since I can't knit, I made it using a navy sweater. I just cut the pattern pieces out of the sweater and sewed it up. It really worked wonderfully; I have basically been wearing it nonstop, and since the bow is interchangeable, I can wear it with many different things. 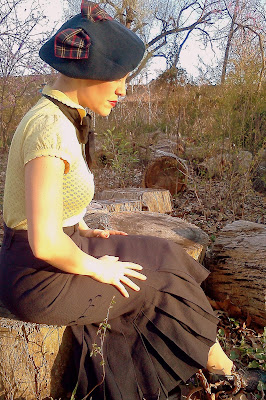 I actually made that particular bow to match another dress that we also photographed that day, so you'll see it again in my next post! You'll also see the skirt paired with some tops that I have recently finished, and hopefully we will get some better-quality pictures of it next time, when we will use a real camera! 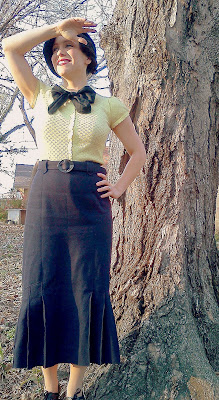 Finally, I would like to welcome my newest followers: Andrea, Gabriella, Fran, Iz bakinog ormara, The Ziegfeld Boudoir, Nuranar, and Sewn_Seabee ( I hope that I haven't missed anyone)! Wow, I never thought that 30 people would actually be interested in seeing my small corner of the world!
Posted by Nabby at 6:43 AM 14 comments:

I decided that I needed to do something about the (poor) quality of my pictures. After studying many vintage advertisements and pattern envelopes, I came to the conclusion that the main issue with my photos is that they look too pose-y. In most, if not all, of the images I saw, the models were not looking at the camera, and almost never were they smiling. They were usually holding books or golf clubs or looking at something in the distance; in other words, the photos had the look of stylized candid shots. Or more accurately, candid shots in which the models seemed to be saying, "Oh, you just captured a perfect image of my outfit, but I was so busy looking at this tennis racket that I didn't even notice." Ha ha! My favorites featured interesting camera angles and stark contrast of shadows and light. Here are some examples: 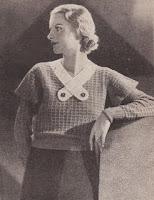 When I started this blog, my main goal with the pictures was to simply get an image of my outfits. But as I have looked at more and more vintage pictures, and also at other bloggers' lovely images, I have wanted to not only show the clothes, but also to show them in a visually pleasing way . To that end, I decided that I needed a different photographer. My husband has the ability to take good-quality pictures, but he doesn't have the patience to do so while watching a 22 month-old at the same time. He also doesn't see the need for anything other than a good, plain, serviceable, picture...he's an engineer; what else can I say? :) So, I asked my sister to come over and take some pictures. She was a drama major...perfect! Unfortunately, the battery in the camera was dead when she arrived, so we used my camera phone. Poor planning on my part, with the result that the quality of the pictures may not have improved much (that's why the tweed looks funny and the lighting is bad)! Still, I think that it's an improvement, at least. Let me know what you think; about the outfit and the photos!

Here are our attempts to capture my latest project: a green flannel and tweed skirt: 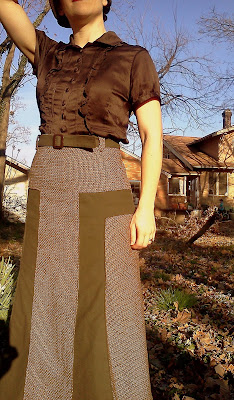 I didn't make the blouse, but I altered it. I cut a strip off the bottom to make some covered buttons, and I added three buttonholes at the top. Three! Everything is so low-cut nowadays...

I made the skirt using this pattern: 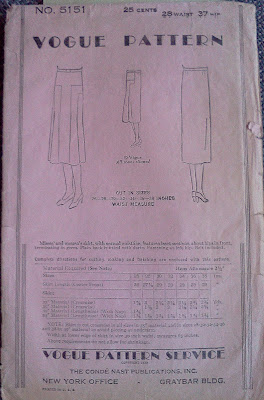 The pattern is very interesting; the back and sides are made in one piece, so that there is no side seam below the hip. It is supposed to close with snaps, but I hate sewing snaps, so I added buttons (fabric-covered, of course!) instead. 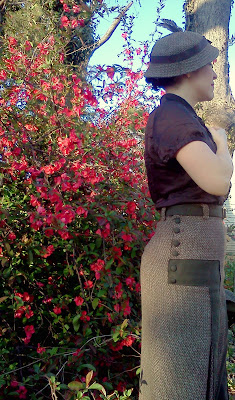 It looks great with the cape that I made for this outfit, too: 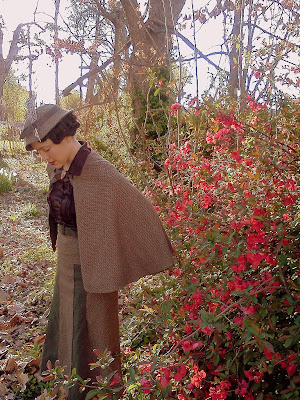 I even have enough tweed left to make a blazer, but I'm too excited about summer clothes right now, so that will have to be first on the list for fall! I also played around with editing the pictures for the first time, and I think that this one is my favorite: 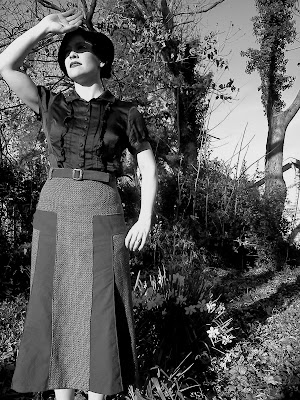 In this one, the model seems to be saying, "Oh, you just captured a perfect image of my outfit, but I was so busy looking at this baby that I didn't even notice." Hee hee 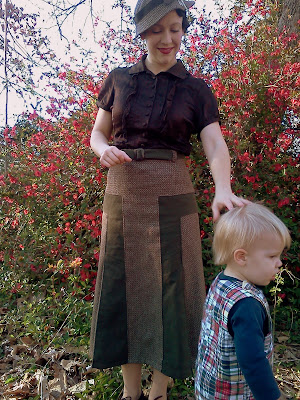 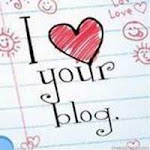 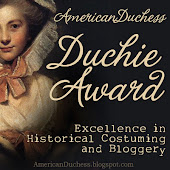